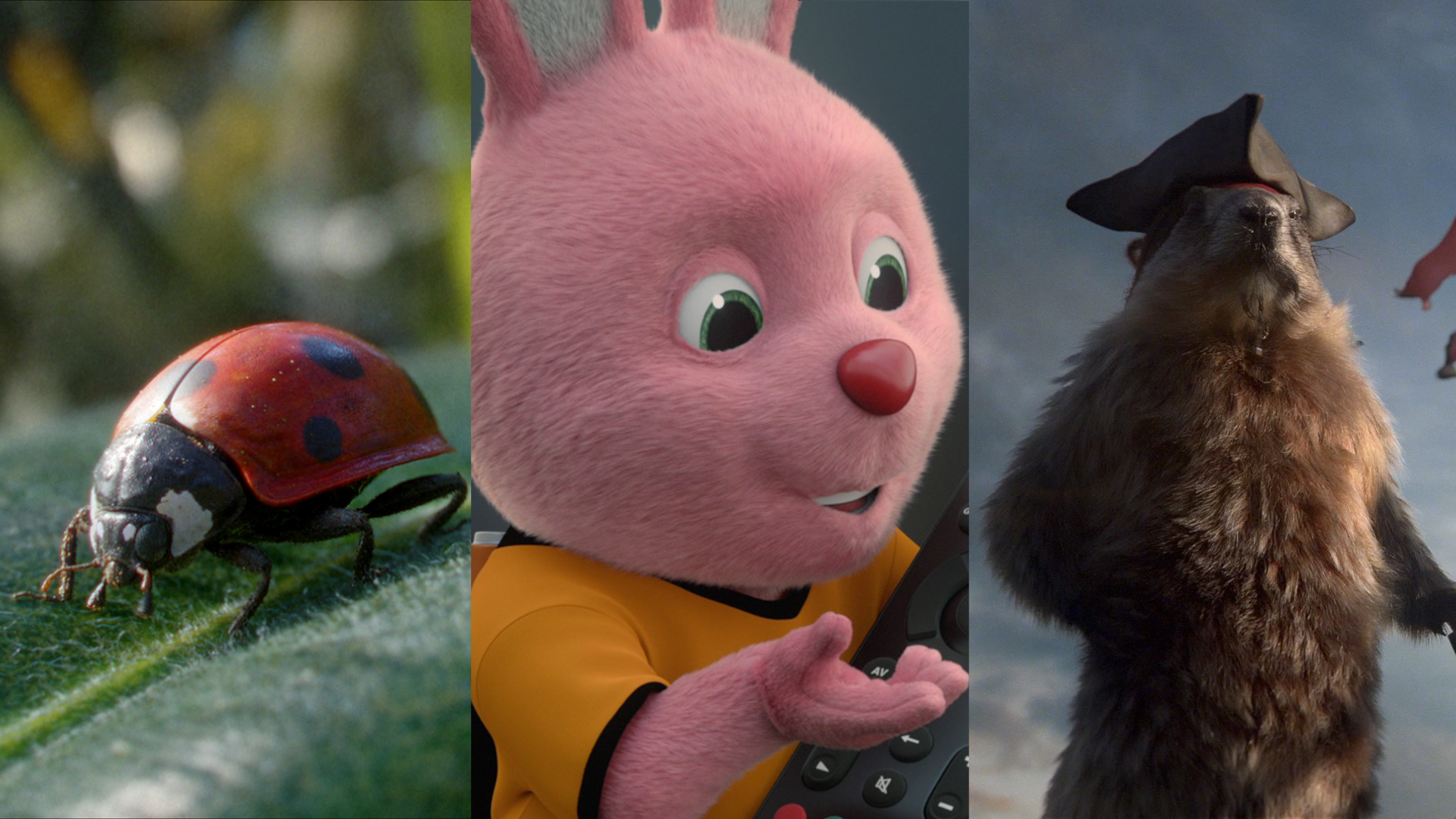 A walking talking bearskin rug, a boxing bee, and two marmots reenacting the famous Pulp Fiction dance scene – anthropomorphised characters have the ability to capture our attention and stick firmly in our memories. And when these characters become mascots, such as the adorable marmots of France 3, brands have the ability to make us fall in love with them – so much so, that French audiences took to social media to ask for more, resulting in the marmots making a return year after year.

Brought to screen by Technicolor Creative Studios’ multi-award winning animation and VFX studio, Mikros MPC is well-versed in crafting animated characters like these. From the famous Duracell Bunny and LEGO’s playful white rabbit, to the Cartier Christmas panther and Feu Vert’s Ramses the cat.

But how do you make animals talk, move, sing and dance like humans in a believable way? The secret is an incredibly fine balancing act as Mikros MPC tell us.

To learn more about this fascinating craft and skill, LBB speaks with the Paris-based studio’s head of creative business Fabrice Damolini and head of marketing Joelle Moorghen Cleworth who reveal their intricate knowledge of how to make characters do lovable human things that keep hearts and minds hooked for years.

A Way With Words

Dr Dolittle may have understood animals in their natural language, but for most of us this is not the case. In order for us to understand creatures and characters on screen, animation and VFX studios must make them talk like humans. But achieving this is no easy feat.

“First, we film an actor reading the script so that we can base the mouth movements of the character on this,” explains Fabrice Damolini, head of creative business at Mikros MPC. “Then, you must have collaboration between the modeller, the rigger and the animator for the most realistic outcome. It’s a case of high-level communication and experimentation across the team until the movements work well with the syllables of each word. The only limit resides in the goal that the brand wants to achieve. This leads the decision on how far we push anthropomorphism for the characters that our artists create and animate.”

One such project is the team’s long-standing collaboration on the instantly recognisable Duracell Bunny, for which they are visual identity guardians. Working alongside the brand since 2012, the team at Mikros MPC have ensured consistency and integrity across all media in over 40 countries – be it TV, digital, social media or print – and the campaigns they’ve worked on have gathered millions of views worldwide.

“We have an eight-year relationship with the brand so far which means we know the character and its capabilities intricately and can keep the quality consistent,” says Fabrice.

“Over time, our team of artists has developed a library of mouth shapes for Bunny and has thus managed to bring standardisation. This is a very precious tool, particularly as it can also work well across different languages. It could only be achieved thanks to the value that Duracell has perceived in such an investment. By doing so, we are able to continuously develop our tech in Unreal and explore his features, movements and emotions to evolve the mascot. We’re now able to animate the Bunny in real time for things like social assets that need quick turnaround.”

“Having worked with the brand long-term, we’re also able to be more creative and focus on the storytelling aspects rather than getting stuck on the technical side of how to animate Bunny,” he continues. “If a different studio was used, they would have to redo the animation from scratch and focus on the technical challenges all over again, such as how to make the mouth and the ears move in a believable way.”

To truly connect with something we’ve got to feel an emotional attachment. So when designing characters for ads, TV, or film, it’s key that they’re able to express themselves using all the complexities of human emotion. And for it to really work, it’s got to go beyond just the words that they speak.

“Human emotions are the trickiest to achieve,” reveals Fabrice. “Most of the time you can translate a lot of the emotion through the eyes, making it one of the most important parts to get right. The past year has demonstrated just how important the eyes are. Even though people were wearing masks and half their face was hidden, we could still tell how they were feeling from their eyes alone. And the rest comes through body language.”

To understand the impact of this, animators often study the work of mime artists who rely heavily on body language alone. For the Paris-based studio, Marcel Marceau is a go-to reference. “He’s often thought of as the French version of Charlie Chaplin,” Fabrice notes. “Research like this is key in helping us understand the subtleties of body language, which is especially useful when working with characters without eyes.”

The team’s skill for animating the inanimate is illustrated well in their 2011 spot for Citroën C3 which received a VES and Cannes Lion award in animation. “The ad features a lovable dog made out of household items that often get left behind when you don’t have enough space to pack everything you need into your car. He had a hairdryer for a head, swimming goggles for eyes, socks for ears, a bag for his body and shoes for feet. We learnt a lot during that project about how little movements – like the way he holds his head or how quick his movements are – can convey different emotions.

Getting a squirrel to slam dunk, a bee to box and a ladybird to breakdance is a huge challenge when their bodies are not physically built to move that way. Yet, the characters we see on our screens seem to be able to achieve the unthinkable with ease, as seen in a biodiversity campaign for Vittel. Behind the scenes, it is talent like those at Mikros MPC that are able to make this happen in a way where the audience doesn’t even question its feasibility.

As is the case with making characters speak, achieving unnatural moves like these requires a fine balance. “It’s about understanding the limitations of the character and combining that with the narrative as well as the creative vision of the director,” shares head of marketing Joelle Moorghen Cleworth. “That’s what helps the team decide whether to make a character very human or more fantastical. In the Vittel campaign, the creatures are seen in their natural habitats and the director really wanted to ensure that movements and emotions still look natural to the animal.”

Fabrice elaborates: “We must first look at the animal’s anatomy, before we then blend it with human references from sports videos. With the Vittel squirrel, we referenced Michael Jordan’s basketball moves but we had to also take into consideration the squirrel’s small arms and legs. The challenge is in keeping poses and movements of the character as close as possible to what its natural capability would be.”

“On top of that, the environment is very important to consider when it comes to what will look believable to the audience,” he continues. “If you take the example of the Vittel bee, she is able to use two legs to deliver jabs and two more to uppercut simultaneously, but what she’s actually boxing with is a flower.”

“On the other hand, the bee our artists created for Galeries Lafayette for their 2019 Christmas campaign is animated in a completely different style,” Joelle adds. “Her movements are magical and enchanting because the goal was to bring out the sparkly Christmas spirit. So the environment is certainly an element we need to incorporate, but it’s not a constraint.”

As another long-standing collaboration, Mikros MPC were able to run wild with creativity on a series of TV idents for France 3, featuring the much-loved Les Marmottes. Striking an incredible balance between realistic marmots and both human and non-human behaviour, the spots were a huge hit with over 10 million views by the end of summer 2015, prompting audiences to call for more.

“As we developed the series over the following years, the animation and rendering of the marmots benefited from our own technological and creative advances to make them more realistic,” Fabrice says. “Thanks to our very talented team, we were able to design close-ups and push the boundaries of what these marmots were able to achieve. Bringing them to life in absurd situations, we took them from playing musical instruments to performing a series of famous movie scenes.”

But what happens when you’re working with something that has no skeleton? Perhaps the most difficult of all the characters Mikros MPC has been asked to create, the walking talking bearskin rug for Canal + was a masterpiece in the art of anthropomorphism. With no skeleton in its body, the living bearskin rug was a combination of realistic bear and inanimate object.

“This was definitely one of the most challenging projects we’ve worked on but also one of the most successful,” remembers Fabrice. “He had a head that could move like a normal bear but a flat rug for the body, which in reality should not have been able to support his head. So making this look right on screen was a huge task! He had to be photorealistic and fully integrated into the live-action footage, and his body had to be light and soft like a rug.”

“This film is a major reference – to us at Mikros MPC and to the industry. It was the most awarded commercial in the 14 year history of The Gunn Report in 2012, when it was released,” shares Joelle. “It is one of these fantastic examples that shows the incredible artistry of our talent who can bring anything to life while creating emotional connection with the audience.”

Where Limitation and Imagination Meet

As the team at Mikros MPC have revealed, the key in making characters act like humans in a believable way lies in the meeting of physical limitation, environment, narrative and well-researched ingenuity. It’s certainly a challenge but when it’s done well, it has the ability to capture an audience’s heart.

“Much like Les Marmottes, Ramses, the brand mascot for Feu Vert was an instant hit with French audiences and very disruptive for its time,” Fabrice reflects. “The audience’s love for the cat is actually the subject of their latest campaign where we see Ramses casting for a new brand mascot. But despite interviewing a shark, hyena and peacock, it’s impossible to replace the original – and the comments on social media are a testament to this. It’s a brilliant idea.”

“This is why our team loves working on characters they can develop and evolve over time,” Joelle states. “When you start to master the mascot and know it really well, you can invest in improvements. It’s great seeing an audience pushing for and supporting a character that our teams have created so passionately.”

“Mascots create such a connection with audiences and they’re so memorable. It’s amazing the impact they have. You could even call them brand ambassadors!”